Some might call Lahmajoun an Armenian Pizza or Flatbread. Some might spell it with a different variation. But I say, don't sweat it... just call it Y-U-M-M-Y!  Because this is the perfect, take-with-you-anywhere Armenian meal!

What Ingredients Do I Need to Make Lahmajoun?:

How Do I Make Lahmajoun?:

Roll each ball of dough flat to a thickness of between an ⅛" and ¼".

Place two circles of dough on baking sheet and top with about a ⅓ cup of mixture. Spread the mixture thinly to the edge of the dough. 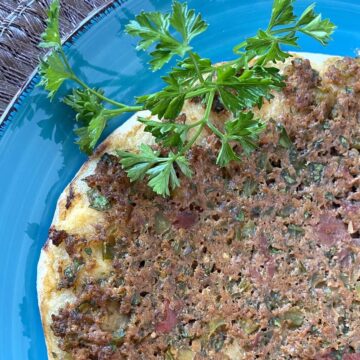 Ready for pizza with some middle-eastern pizzazz? Try our Lahmajoun (Armenian Pizza or Flatbread) for your next pizza night! Perfect for lunches, dinners or on-the-go snacks––once you make this Lahmajoun recipe, you'll want a stash of these in your freezer from here on out!
Print Recipe Pin Recipe
Prep Time 45 mins
Cook Time 14 mins
Course Main Course
Cuisine Armenian
Servings 12

My grandpa Moe used to enjoy folding a Lahmajoun in half and stuffing with sprigs of watercress and thin slices of vegetables.
Tried this recipe?Let us know how it was!

I have always been drawn to my Armenian roots. For me, one of the most memorable parts of family gatherings over the years has always been about the food!  More