Crunchy and bursting with flavor, these Pickled Armenian Cucumbers are the perfect accompaniment to your meal —whether eating sandwiches or shish kebab, or something else that calls for a bit of pucker!

While my grandpa Moe was often the one credited for creating these hot pickles, my grandma Alice also claimed them as her family's recipe.  Now my own dad carries on the tradition in our family, which starts every spring when he plants his Armenian cucumber seeds.

What Ingredients Do I Need to Make Pickled Armenian Cucumbers (and Other Pickled Veggies)?

Armenian cucumbers: (You'll probably have to plant your own Armenian cucumber seeds unless you are lucky enough to buy some at a Farmer's market or an Armenian grocery store.)White vinegar, water, salt and sugar: Heat these ingredients together on the stove.Pickling spice, minced fresh garlic and hot yellow peppers: Add these directly to each jar.

You may also decide to pickle other vegetables. This recipe will work great for your other garden veggies: zucchini, string beans, carrots, cauliflower, etc.

How Do I Make Pickled Armenian Cucumbers?

Stir vinegar, water, salt and sugar in pan until the salt and sugar dissolves. Wash and cut cucumbers into strips. You might also want to peel any brown spots if your cucumbers have sat a few days. If desired, you can cut up other veggies to pickle.

Score a "plus" sign into the tip of each hot yellow pepper.  You will use two peppers per jar.

Arrange the cucumbers (and/or other veggies) into quart jars, along with two, hot yellow peppers.  Pour the vinegar solution in each jar until a ½ inch from top. Add a teaspoon of pickling spice and 1 minced clove of garlic to each jar. Place a lid on the jar.

You will need a fresh lid if you are pressure cooking your cucumbers for long-term storage. Push down on lid in center with finger and then screw ring around jar tightly. Refrigerate the newly pickled cucumbers for 7 days before eating for optimal taste.

Since the jars of pickles are not shelf stable unless you have properly canned them with a pressure cooker, you will need to store them in the refrigerator.  They should be consumed within 3-4 weeks.

(Some home pickle recipes say they last for 2 months.  Just keep an eye and nose on them!  And remember that commercially canned pickles have a longer storage life...although they can't compare in taste!) 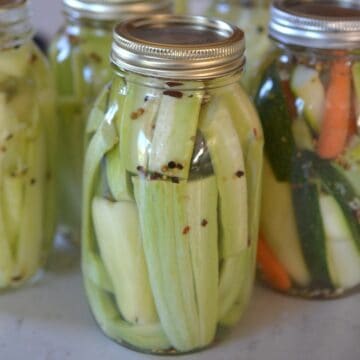 Keyword pickles
Tried this recipe?Let us know how it was!

I have always been drawn to my Armenian roots. For me, one of the most memorable parts of family gatherings over the years has always been about the food!  More